How To Properly Measure an Envelope 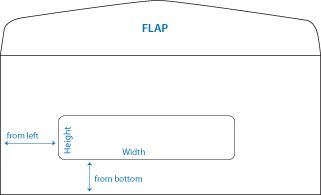 Aside from the fact that many otherwise intelligent adults these days seem to have a problem using a ruler (don’t get me started on this one), there are some rules for measuring and identifying dimensions on regular, expansion and window envelopes which can make things a little tricky. Here are a few tips to keep in mind.

Generally, envelopes will never be identified by a unit of measure smaller than one-eighth of an inch.  That’s because there is a tolerance of plus or minus one-sixteenth of an inch in all manufactured envelopes.   So, if you’re measuring an envelope and the width seems to measure close to say, 4-1/16 of an inch, the envelope will actually either measure 4 inches or 4-1/8 of an inch.  In other words, it was manufactured to either one of those sizes and because of the tolerance, it folded slightly larger or smaller. You would most likely go with whichever one happens to be closer; i.e. you’d round up or down. If the measurement is close to a standard size, then the “true measurement” of the envelope is probably the standard size.

Double window envelopes are measured in the same way. You just take one window at a time and then express them on your quote request as “top window” and “bottom window” or left and right window depending on the particular custom window configuration of the envelope.

Measuring an expansion envelope can be tricky because of the expansion panel (also known as a “gusset”).  On these types of envelopes there are three dimensions; width (the shorter dimension), length (the longer dimension) and thickness (measured when the envelope is fully expanded on all sides).  The easiest way to correctly measure an expansion envelope is to fully extend the side (expansion) panels all around. By doing that you create a small, three-dimensional “box” which shows you where the true edges are on all sides including the top where the flap is located.  Before the envelope is fully expanded, there are multiple score lines especially at the top of the envelope. It’s very common for these types of envelopes to be measured incorrectly by selecting the wrong score as the true edge. Puffing out or expanding the envelope solves this problem. You can now see where the actual edges are and can measure the length and width accurately.  Remember that the expansion is always the same on all sides.  A typical expansion envelope measurement might be expressed as 9 x 12 x 2.   The only other curveball on this is whether the bottom of the envelope is a “V-Bottom” or a “box-bottom”.  V bottoms are shaped like a V and don’t lay flat unlike a box bottom. If you are measuring an expansion envelope with a V bottom, you can get the true expansion dimension from the sides and the top.