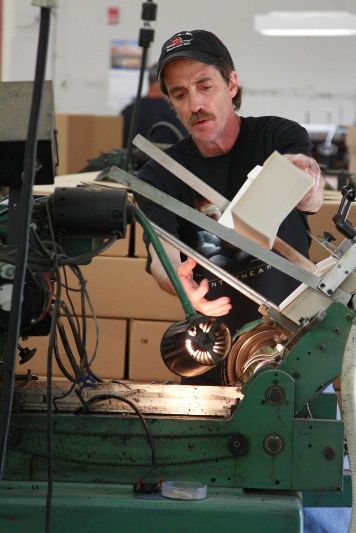 In our last blog we presented the issue of variation in envelope converting and the reasons why it happens. In today’s piece, we’ll add the third and final reason for variation; jet offset envelope printing.

Envelopes can be printed in 3 ways (that topic to be fully discussed in a future article). The type of printing where variation can come into play is Jet offset printing. This is when the envelope is made and then printed after the fact.  In the typical Halm jet offset printer, a stack of envelopes is placed on one end and through vacuum pumps is fed through the printing cylinder over the plates and printing blanket and out the other end.  Like the envelope folding machine which forces the envelope to travel over a distance to its final destination, the printing press brings the envelope through various stages which cause it to move slightly.

If the envelope is being printed with the same copy for each item and going through the press once, the amount of variation is so slight as to be virtually undetectable. However if, say,  you have a company logo that has been pre-printed onto the envelope and you are then feeding those “shells” into the press to add a certain return address next to the logo, you could see some variation or “bounce” in the placement of the return address in relation to the logo.  As in folding, the variation is generally within 1/16” of an inch but it could be more on a larger envelope like a 9 x 12.

Which brings us to things you can do to minimize the variation in your custom printed envelopes or custom envelopes in general; here are a few ideas you can put to use:

Be realistic with your design – Certain designs for envelopes are almost sure to be a problem. Perhaps the most common one is designing the flap to be fully covered in a certain ink color. This looks cool but unfortunately the variation inherent in the process will cause there to be either some white on the flap or some color folding over of the color to the front of the envelope. The best way to avoid this is to either end the color 1/8” below the score line or wrap-around the color to the front 1/8”. It might not look as sharp but you’ll get a much neater and more consistent look.

Avoid gloss coated stock where possible – Yes, it’s shiny and looks and feels great but it is also much more difficult to handle and the slipperiness of the coating causes more movement in the paper both in cutting and folding which can bring about greater variation.

Deal directly with an envelope converter – Those of us who do this type of thing on a daily basis will be more familiar with the potential pitfalls and how to avoid them.

Have you had any problems with envelope variation on your printed pieces?  Contact us and we will provide an analysis of the problem at no charge or obligation to you.